Posted by Rev'd Simon Cutmore at 22:13 No comments:

I shared this a few years ago, but it's so good, I thought I would again...

Posted by Rev'd Simon Cutmore at 14:17 No comments:

Posted by Rev'd Simon Cutmore at 11:19 No comments:

Posted by Rev'd Simon Cutmore at 11:18 No comments:

There is a little girl who loves to wear pink dresses, shiny paten shoes, with a little purse and sparkly headband.  You see her in a million different places, if you keep your eyes open.  She wears a smile and is usually holding the hand of someone she loves –that is when she is not twirling around watching her skirt branch out like a bell.  It is obvious that this little girl loves life, it oozes from her.  Most when seeing her smile back, chuckle to themselves, or wish to have even a little piece of her joy.  The little girl is Gaudete.

Gaudete is a Latin word that translates “to rejoice.”  This third week in Advent has traditionally been named Gaudete Sunday from Philippians 4: “Gaudete in Domino semper” (“Rejoice in the Lord always”) which we heard as our NT reading – a day when in some places a pink candle is lit on the Advent Wreath; and priests are allowed to wear pink vestements - the joyful lightening of the Advent purple and we are called to rejoice in the God who is coming.

Advent is a time for joy, not primarily because we are anticipating the anniversary of the birth of Jesus, but because God is already in our midst. That is what the prophet Zephaniah claims, and he makes that claim twice. He is speaking to a people who have been burdened with war and destruction and displacement. Their lives have been assaulted and their hopes have been dashed. In the face of this the prophet directs them to “Shout for joy… Sing joyfully…. Be glad and exult.” How can they possibly respond in this way?

The prophet assures them that with God in their midst, they can indeed move forward into a new life. In God’s presence they have nothing further to fear. No longer do they stand under judgment, for they will be renewed in God’s love. Are these empty promises? Can this really come to pass? It was up to Israel to decide whether they would turn to God and trust in the promises made to them or continue on the path they had set for themselves.

Unfortunately, our world is not terribly different from theirs. It too is burdened with war and destruction and displacement; lives have been assaulted and hopes have been dashed. We are probably as sceptical about peace and restoration as were the ancient Israelites—perhaps even more. However, this scepticism need not prevent us from trusting that God will encircle us with love and will grant us the peace we so desperately seek.

Saint Paul also calls us to rejoice. In fact, he says that we should rejoice always, because the Lord is near.  There is no contradiction here regarding God’s presence. Paul did not think that Christ is absent from our midst. Rather, he was speaking of Christ’s final manifestation in glory. It is that time that is near; hence there is reason for rejoicing. But notice what else he says. In anticipation of that time of fulfilment, he admonishes us: “Your kindness should be known to all.” Though peace and restoration are given to us by God, they do not simply drop down from heaven. We are involved in their fashioning. Still, we do not create this renewed world; God does. Furthermore, it is not given to us as a reward for our labours; it is fashioned within and through the very efforts we make.

“What shall we do?” This is the very question the crowds asked John the Baptist. We might expect this ascetic to make radical demands: Leave everything and join me in the desert; adopt a life of fasting and penance.

But John does not make such demands. Instead, he calls people to fidelity in the very circumstances of their lives: Those who have more than they need, share with those who have less; tax collectors, be honest; soldiers, do not take advantage of the vulnerable; parents, cherish your children; spouses, be faithful; neighbours, live in peace.

John models an attitude of mind and heart that is needed in today’s world. Though he was eccentric, he was very popular. People from every walk of life thronged to him. While some no doubt came out of curiosity, others were clearly motivated by religious fervour. They sought his advice about the direction their lives should take. John could have taken great pride in his reputation and in the influence that this probably afforded him, but he did not. Quite the contrary. He knew who he was, and he knew who he was not. He did not use his influence to enhance his prestige. He clearly was an honest man: a man of humility.

We cannot fail to wonder how much of the world’s sorry state is not the consequence of arrogance: arrogance stemming from military dominance, or economic prosperity, or educational superiority. Because lets’s face it - people and nations less fortunate are sometimes minimized or treated as inferiors. Resentment turns to hatred, and hatred breeds violence. This does not excuse acts of terror or insurgency but it does suggest that we have a hand in this.

Violence and terror seem almost to be a part of the world in which we live, and this curtails the freedoms not just in Syrian streets, but here in this country where our civil liberties, our freedoms are curtailed out of fear, well meant, but fear nonetheless.

But this does not have to be the case. It is precisely because this world filled with resentment and hatred and violence that can be transformed. It is precisely in and through our efforts to rid our world of such a scourge that the new world is fashioned, the reign of God brought forth.

Are these empty promises? Can this really come to pass? It is now up to us to decide whether we will turn to God and trust in the promises made to us, or continue on the path we have set for ourselves.

It took a faithful, brave and visionary man like John the Baptist to stand against the tide of first century Israel and their occupiers. It will take faithful, brave and visionary individuals to once again proclaim freedom, justice and the Kingdom of God where the blind see and the captives are free. This will keep us looking busy for when he returns again in glory.  God is already in our midst. Rejoice! … and keep busy.

H/T to Fr Simon Rundell for substantial inspiration for this post/sermon - thanks!
Posted by Rev'd Simon Cutmore at 21:06 No comments:

Here are some details of our worship in the lead up to, and over the Christmas celebrations. Please do come and join us - all are welcome :) 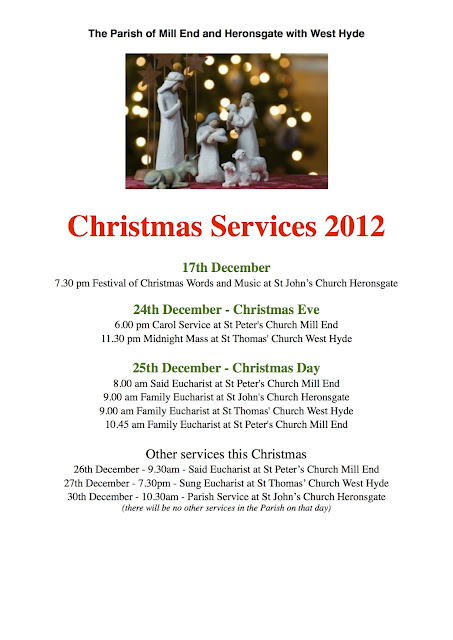 Posted by Rev'd Simon Cutmore at 10:39 No comments:

May we (at least our waste) decrease so He may increase What would you like for Christmas? How much packaging will it come in? Our bins all overflow for weeks after Christmas... as we celebrate the birth of life in it's fullness, I am left with a real unease. The more we consume, the more we consume of our life and the lives of others both now and in the future.

In the days that lie ahead, if you have seen something you like for yourself. Wait a week and if you still want it go and buy it then.

Advent was traditionally a period of penitence and quiet anticipation. But now it seems no more than four weeks of frenzied consumption in which stress, needless debt and damage to God's creation have become its defining hallmarks.

125,000 tonnes of plastic packaging will be thrown away this Christmas?
333,333 trees will be used for Christmas cards?

Countless unwanted "gifts" will end up, at best, in the charity shops and, at worst, in the landfill.

If Jesus returned in December 2012, what would he make of us doing all of this in His name?

So, instead of shopping, we want you to come together to celebrate and anticipate the birth of Christ together, in community, reducing your consumption footprint over the Advent period, the time famed for its excessive rate of consumption and to build friendships whilst doing so.

We say no to singing Santa mugs, golf ball washers and umbrella hats that will be discarded by the 12th day of Christmas, and yes to living simply, together, over the Advent period.

As we prepare for God's coming to us, and therefore our coming to Him, can we do so with a clear conscience with those sorts of statistics to do with the way we are treating each other (made in the image of God) and the Earth (God's good creation)?

For further thoughts see the Operation Noah website
Posted by Rev'd Simon Cutmore at 14:23 No comments: